The Saami Costume gives information about where the wearer belongs and it also tells about the wearer him/herself. The Saami people used to wear their traditional costumes daily, but nowadays there are only a few places where people put on their costumes every day (Guttorm 2000). From old sources we can learn that the costumes used to be quite alike all over Sápmi, but then local differences were eventually developed.

Rough home spun was the original material for the costume. This could be made by the Saamis themselves or got it through bartering. Quite early the broadcloth in different colours also appeared and costumes were sewn out of it.

The origin of the cut of the Saami costume is often discussed. The Saami have always, as well as other peoples, been interesting in design and decorating themselves. This curiosity has also led to the discovery of new cuts and shapes, which has given inspiration to adaptation of the garment according to personal taste. It is easy to see that the basic cut of the costume comes from the cutting of the different pieces of reindeer-calf-skin for a fur coat. The fur coat is made to work in and it is supposed to keep its wearer warm, and therefore it is cut to give plenty of room for movement. It is the material that shows the way the different pieces of fur are cut, and the same pieces have then been adjusted to the cut of the costume as the Saami got hold of broadcloth so early.

If one looks at a costume of today it is possible to tell which area it comes from. The way the person has put it on gives further details of its origin. The back of the costume consists of many parts and gussets have been put in between the parts in order to make the costume wider. Gussets are inserted both for men and women. The costume for women is longer than for men. Other items like belts, hats, brooches, shawls and breast pieces complete the costume. They give more information of its wearer and her/his area, such as which family he/she belongs to and who the maker of the costume is. Not everybody wears a hat all the time, but wearing a belt, shawl or breast piece is still required.

It is both the wearer and the maker of the costume who decide how the costume should be decorated. In the beginning the way of combining colours was rather limited, making boundaries from one place to another, but nowadays colour combinations are more free and the costume makers follow their own opinion more and more. It is often the costume maker's Christian belief and wish of following traditions that decide what the costume looks like. The need of showing local characteristic traits varies. Some areas are more open to change than others.

In some areas people do not use their costumes anymore, but luckily some people have revived their tradition. The Sea Saami along the coast of Finnmark and Tromso the Norwegian side of Sápmi, serve as an example of that. The costume makers have done research in order to establish what their costumes looked like before they disappeared, and then they have made new costumes adapted to modern times and thus revived the wearing of them (see Fors/Enoksen 1991).

The most eastern and northern costume is the costume of the East Saami, which can be found both on the Russian Kola Peninsula and in the Finnish East Saami area. The Eastern Saami costume is also used in the Njávdán area in Finnmark, Norway. The costume of this area can be recognised from its cut and the way the hats and belts are decorated. Beads are used for decorating both hats and belts.

The fringed shawl belongs to the costume of the North Saami women and the scarf belongs to the costume of the men. The North Saami costumes can be found in the following areas: Vuohčču/Vuotso and Ánar/Inari (cf Jomppanen 1982), Deanu/Tana both on the Norwegian and the Finnish side of the river, Unjárgga/Nesseby in Norway, Guovdageainnu/Kautokeino in Norway or Enodat/Enontekiö in Finland, Gárasavvon/Karesuando in Finland and Sweden, Giron/Kiruna in Sweden and Skánit/Skånland in Norway. In some areas, like Gárasavvon/Karesuando and Giron/Kiruna, the men use a breast piece is instead of a scarf around their necks. The breast piece has become more and more popular among women as well, for example in Gáivuona/Kåfjord on the Norwegian where the costumes have been reconstructed. Here the breast piece is decorated with pieces of yellow mica, broadcloth and thread in different colours. In Guovdageaidnu/Kautokeino and to some extent in Kárášjohka, people have started to make breast pieces out of silk decorated with beads. This silk breast piece is worn under the silk shawl.

In the South Saami area, the breast piece, or boengesskuvmie, is decorated with pewter thread and also with twisted ribbons, provnieldikie (botnjojuvvon báttit). Decorating with beads came later. The way the breast pieces are decorated is based on local traditions within different areas and families (see Dunfjeld 1999 and Dunfjeld 2000).

The way of dressing or putting on your costume is important in this context. How the, often pleated, lower part of the costume is arranged and the size of flounce is of vital importance and there are many words to express this in Saami: Hámálaš geamppas are words that tell that a person has put on her/his costume in a beautiful way. When the costume is lodnjái it means that the bottom part of it stays in one place in a beautiful way.

The names of the different hats indicate the shape and origin. Here are some examples. Skupmot is a hat that are worn outdoors. They used to be worn on top of another hat. Today skupmot are made just as winter hats, not to put on top of any other hat. Šamšad is the hat of the Eastern Saami women. Ládjogahpir was used in Finnmark from 18th century to the beginning of the 20th century. This was a very special hat as it was filled with a wooden piece shaped like a horn. After this, other types of hats were introduced, nulpo- or jollegahpir. Šávka is the four-pointed hat for men. Duorran is the name of the Čohkkiras/Jukkasjärvi women's hat and matjuk is used by women of Váhtjer/Gällivare. čuipi is the men's hat in Gárasavvon/Karesuando. It has a big tassel and a peak. The half-rounded tjurre thope was used by women in South Saami areas before 1950.

Luhkka is a hooded garment that is worn on top of the fur coat or the costume. The origin of the luhkka might be the njálfáhtta that was used by women. The njálfáhtta did not have a hood in all areas. Duodji: tools, materials etc.. 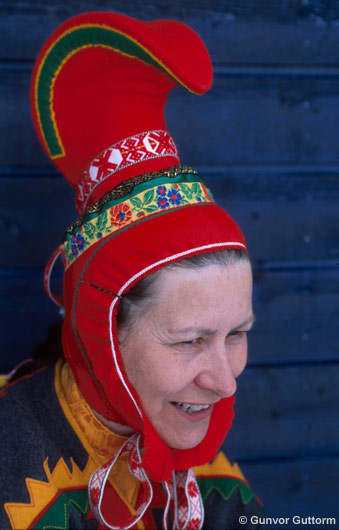 Ládjogahpir
A hat for women. It was filled with a piece of wood shaped like a horn. Made by Anna Lydia Johansen from Deatnu (Tana/Teno 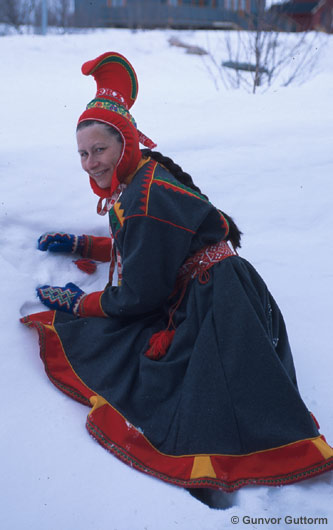 Sámegákti
A Saami costume from the Karasjok area, made by Mary Sarre. Kárášjohka (Karasjok) district. The original model from the 18th and 19th century. 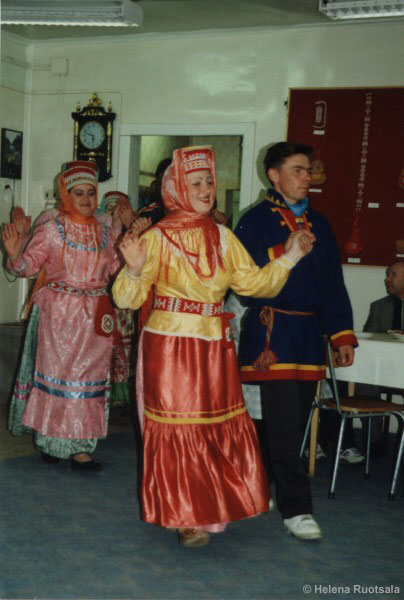 The Ojjar group performing in the National Cultural Centre in Lovozero in July 1966.
The young man is wearing a jupa, the women are dressed in sarafaanis. 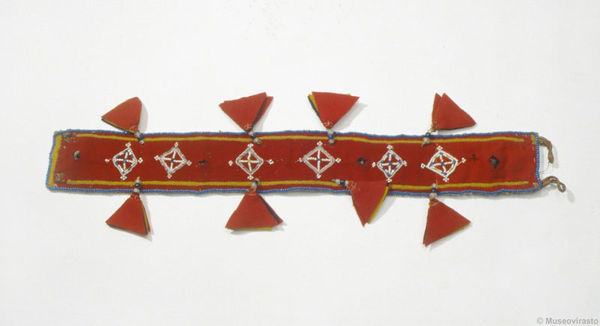 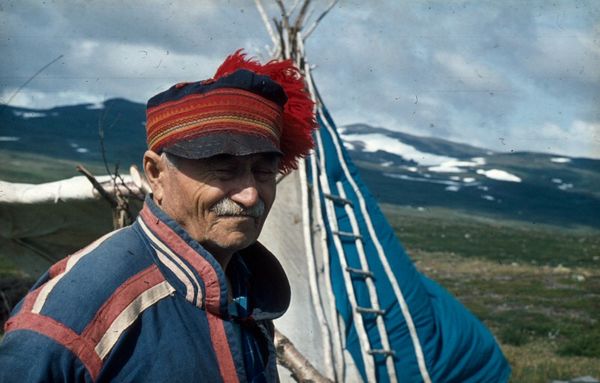 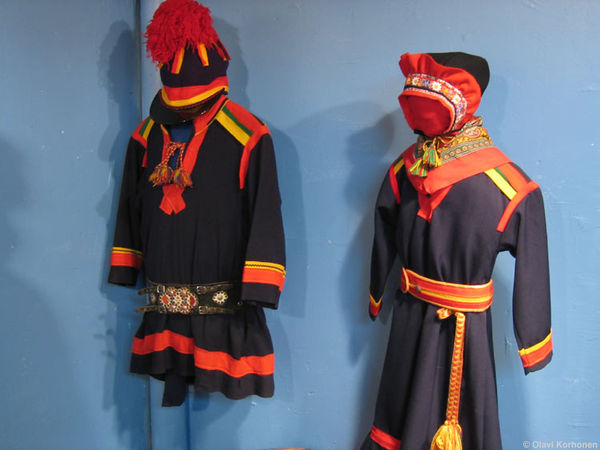 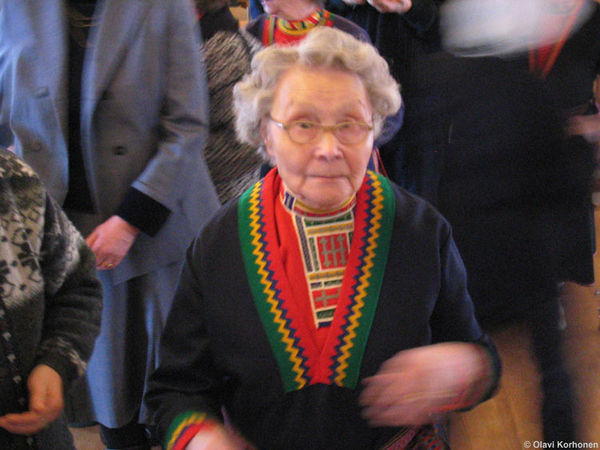 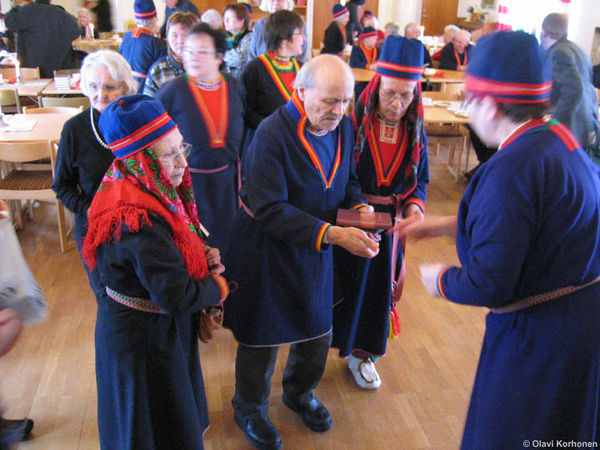 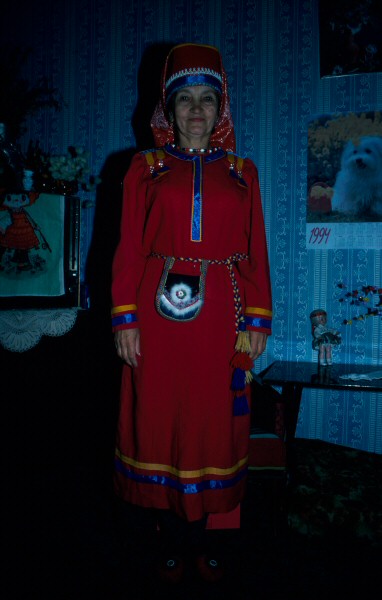 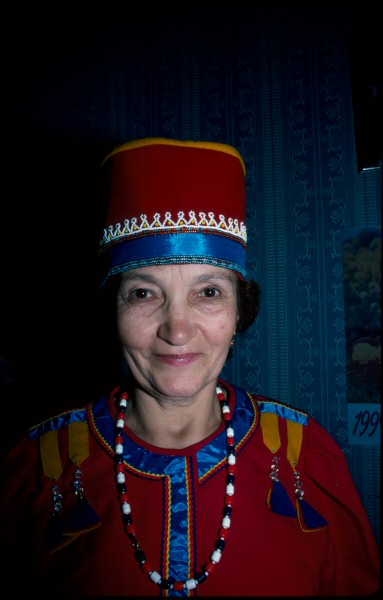 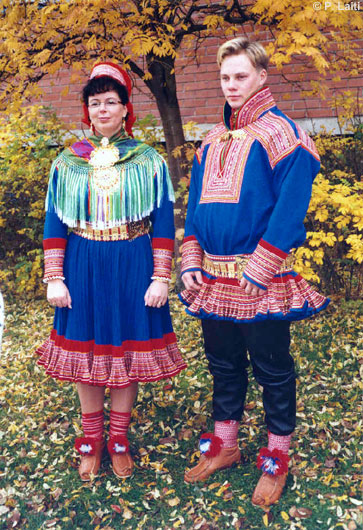 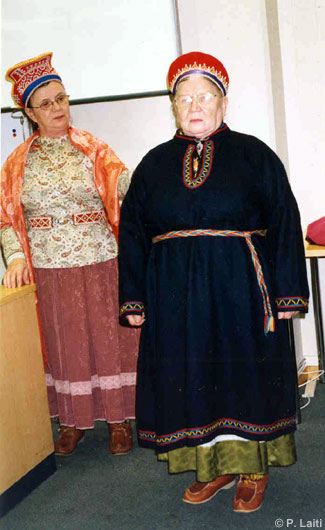 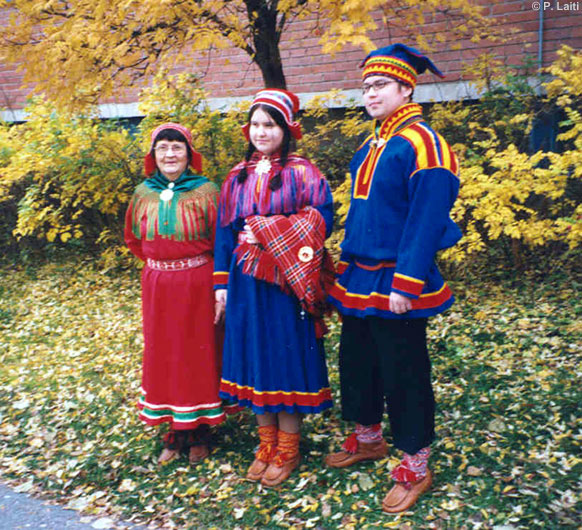 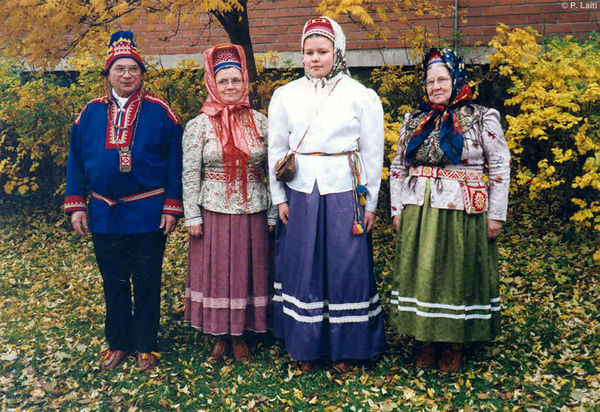