Antler čoarvi is another important raw material for Saami handicraft Duodji: tools, materials etc.. The antler of both the doe and the buck is used, but most artists prefer the antlers from five-year-old bucks as they are bigger and stronger. However, old handicraft shows that smaller antler have been good enough as raw material. Big knife sheaths show this. If one looks at museum objects it is evident that the making of big knife sheaths was more common when the Saami started to produce knife sheaths. These big sheaths are made of two antlers that are joined together to form the breadth of the sheath. The big knife is an important tool for making handicraft and repairing things. The shape of the sheath and the knife handle has changed as well as other artefacts throughout history. Older knives show some local differences in shape and decoration. The shape of the sheath can be divided into three: straight, bent or sharply bent. These differences are no longer that important as handicraft is nowadays taught at school. 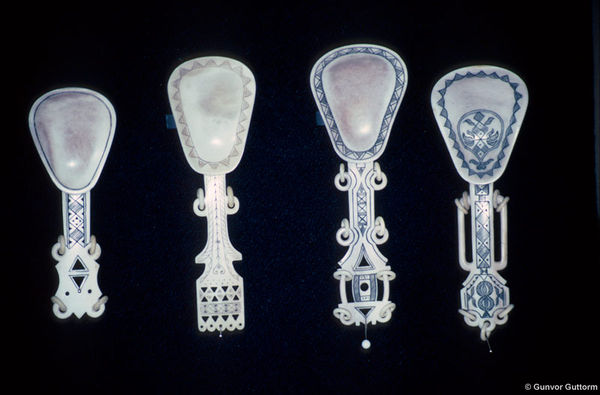 The spoon/čoarvebaste is another artefact with long traditions. The need for the horn spoon emerged when the Saami started to eat food demanding a spoon. The material for the spoon is taken from the front stem of the antler, or the lowest portion of the antler. There it is twisted and wide enough for shaping a spoon. The special shape of the Saami spoon can be traced back through time. Scholars have found that the shape of the Saami spoons can be found in other parts of the world, which indicates that the Saami spoonmakers have been influenced by other. Then the shape of the spoons has stayed the same throughout history. The spoon has a short handle and the spoon itself is wide. Here again, the spoons' shape and patterns are different depending on which area the spoon maker belongs to. Some spoons are richly decorated. The Saami began quite early to order silver spoons, using their own antler spoons as models. Knud Leem, among others, writes that the Saami sent their antler spoons to gold smiths for the making of silver spoons in the 18th century.

There are many Saami artists who work with antler and use the horn for different purposes. Among them can be mentioned: Petteri Laiti, from Anár/Inari on the Finnish side of Sápmi, Sakari Saijets, from Guovdageaidnu/Kautokeino, Håvard Larsen, from Lavangen, Arvid Jåma, all from the Norwegian side of Sápmi, Randi Marainen, from Øvre Soppero and Per Isak Juuso, from Nearvá/Mertajärvi both from the Swedish side of Sápmi. 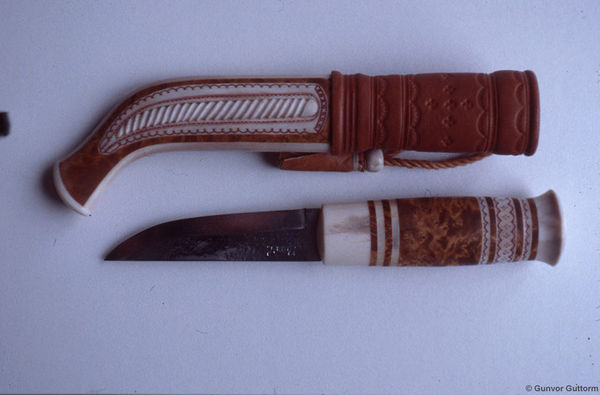 Niibi
A knife and sheath with horn ornament, made by Anders Sunna, Giron (Kiruna). 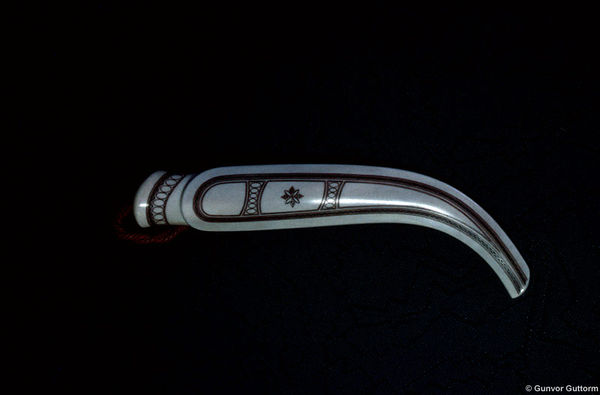 Niibi
A knife and horn sheath with ornament, made by Jon Tomas Utsi, Bårjås (Porjus).