Náhppi, a ladle for milking reindeer

The náhppi has been used all over Saamiland/Sápmi. The word náhppi probably originates from the Old Norse hnappr, which means dish. In German we can find the word nápf, which also means dish. The Finnish etymological dictionary explains the Finnish word nappa or naapa as dish or vessel. As the Saami domesticated their reindeer the adjusting of the bowl for milking a female reindeer took place. The náhppi can today be divided into two categories: one having the original shape for the purpose of milking the doe, and the other having a developed shape with the original as a basis, but the purpose is no longer milking. If one looks at old milking bowls one will find náhpit of different shapes: some are of very deep and round shape, while others are shallow and open. When the doe was no longer milked, the making of náhppi has developed into something beyond handicraft, namely art. In that way the náhppi became more abstract and got a totally different meaning. The shape of the handle changed, as it no longer was going to be used for holding during milking. Today we speak more of polishing and decorating of the náhppi than in the old days. The same thing has happened to other Saami artefacts that previously had other usage. The purpose, and thus the content, has changed. Today it is also common for women to make náhppi. 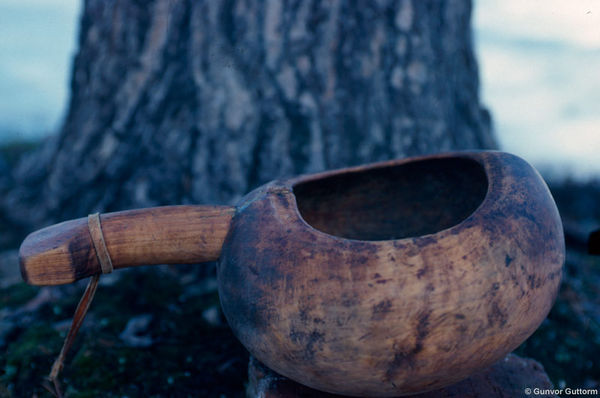 Náhppi
Náhppi, a vessel for milking reindeer owned by Anders Henning Bær, Guovdageaidnu (Kautokeino). Made in the middle of 1800. 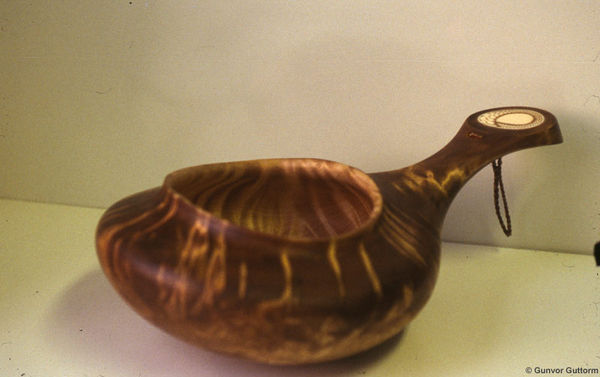 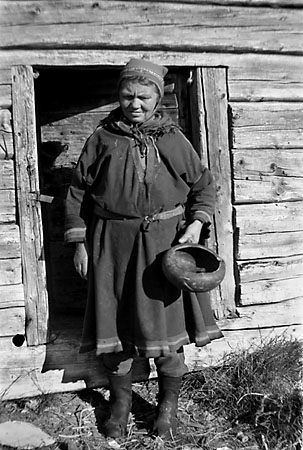 Old lady with a náhppi in her hand.